All characters, companies, and events in this scenario are entirely fictional. The goal of the scenario is to demonstrate how a contractor might use the Paramount Decisions process to develop a transparent and sound decision.

A plumbing design-assist contractor working on a new commercial project needs to determine whether he should use a central or a distributed hot water system. Both design alternatives are very common in the industry and he wants to determine which one is most suitable for this particular project. He is using Paramount Decisions because the process allows him to: 1) make an analysis that considers the context of this project, 2) gather feedback from stakeholders on the advantages of the options, 3) document the process, and 4) communicate his recommendation to the client.

The first step is to define the decision's goals and objectives. In this situation the goal is to choose whether to use a central or a distributed hot water system. The stakeholders of this decision include: the contractor, the owner, and the future tenants.

For this decision, he has considered these factors:

The criteria of each of these factors are shown below.

After he has locked down the factors and criteria, he goes to his engineer to ask for data relevant for this decision. The data of the alternatives for each factor is also called an attribute, which is a characteristic, quality, or consequence of one alternative. Using data from the manufacturer and his engineer's calculations, he is able fill out the attributes.

The attributes of this decision are shown below. 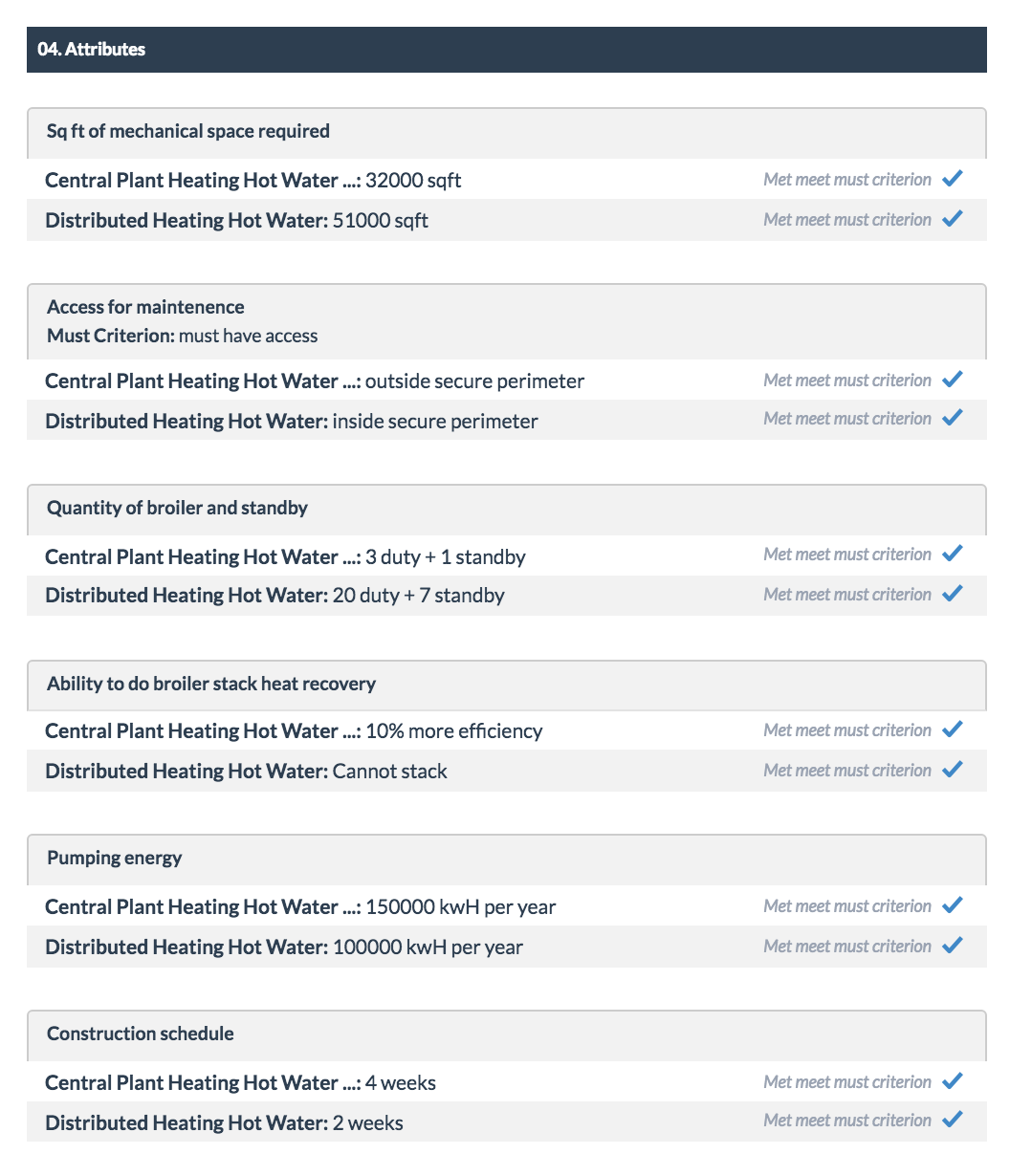 The key insight in making good decisions is to base them on the advantages of alternatives. Following the Paramount Decisions' three step approach, he is able to identify the least preferred attribute and the advantages of the other alternatives relative to it. He finishes this step by selecting the most important advantage within each factor.

Some of the advantages that he found through this analysis are: 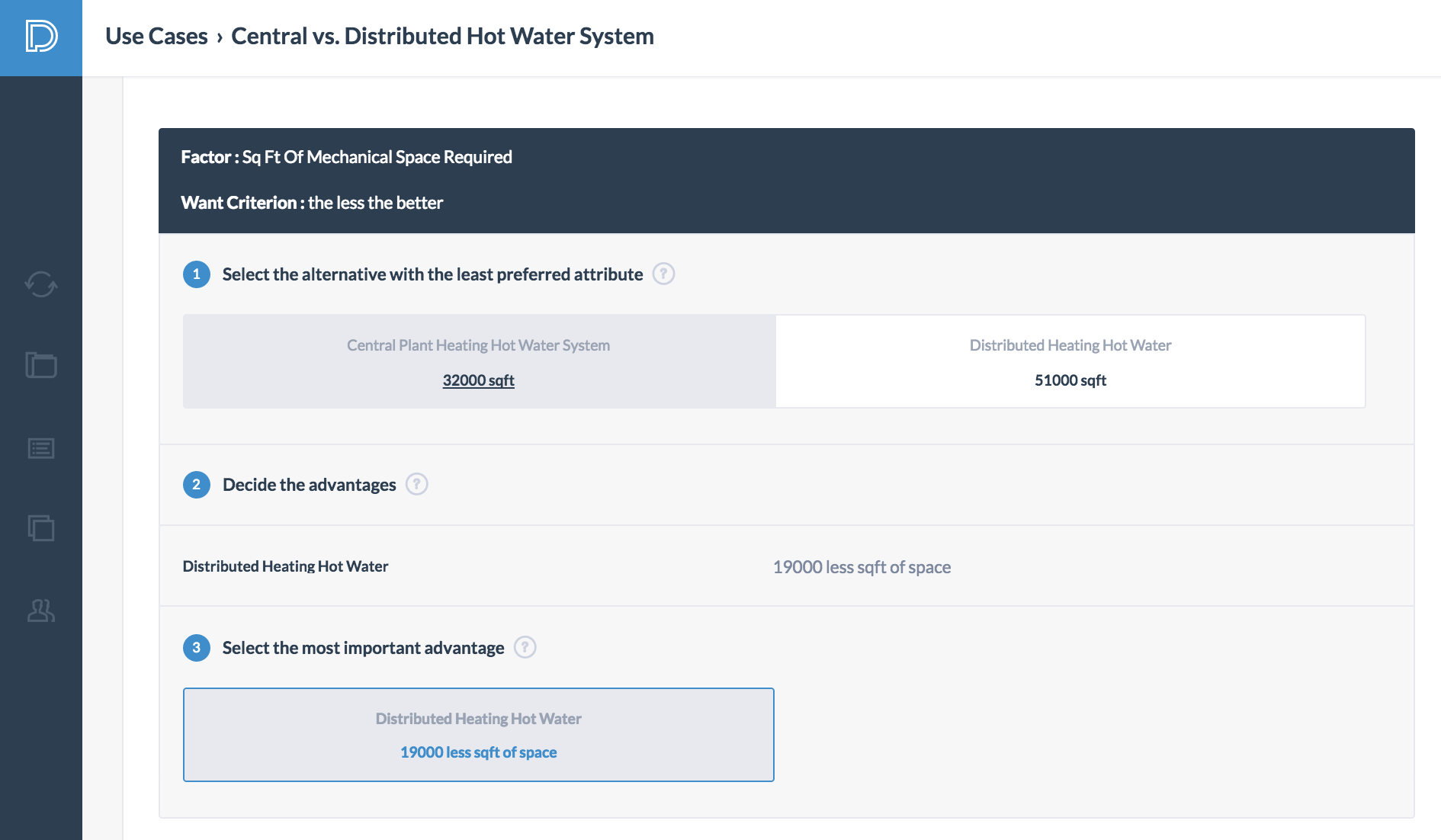 In the sixth step, he talks with the relevant stakeholders and gets their feedback on which advantage they find most valuable. After selecting the paramount advantage, he proceeds through the three step process and assigns a weight to each of the advantages. 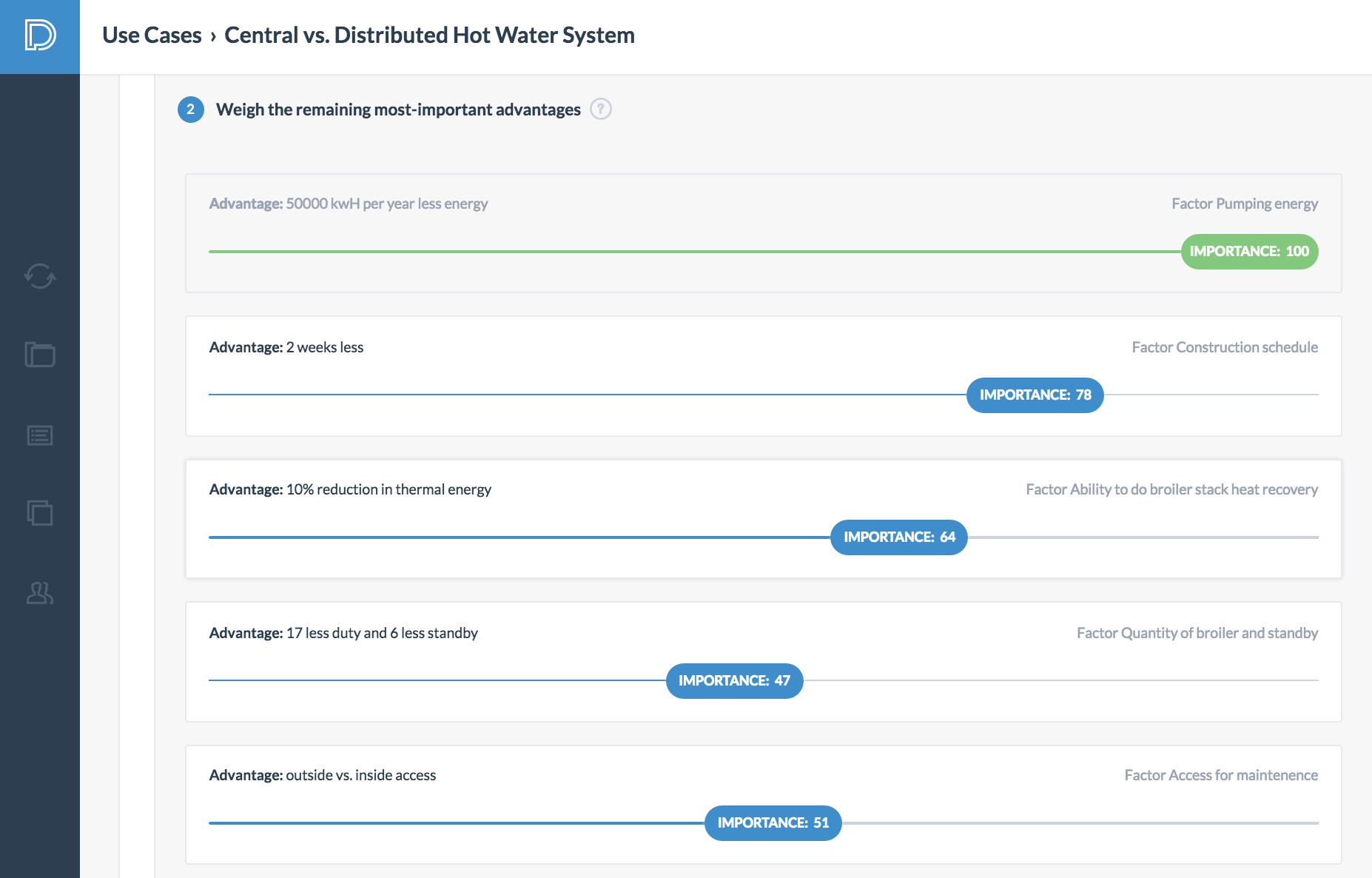 The seventh step in the decision-making process is to define the cost. The cost is the price that must be paid in order to obtain an alternative and can be broken into several categories. He conducts a whole life cycle cost analysis on both systems taking into consideration their construction cost, energy cost, and maintenence cost over the lifetime of the building (40 year period). He then adds the total cost into Paramount Decisions.

After consulting with the stakeholders, he was able to determine that it was not worth it to spend an additional 20,000 USD to obtain 52 additional importance of advantages. The stakeholders believed that the money will produce a greater amount of value if it is spent on the furniture and new LED lights for the building. The stakeholders appreciated his thorough analysis and liked the fact that they can see where the alternatives lie in terms of their advantages and total cost. They were able to make an informed decision knowing the trade-off between the advantages and the cost. 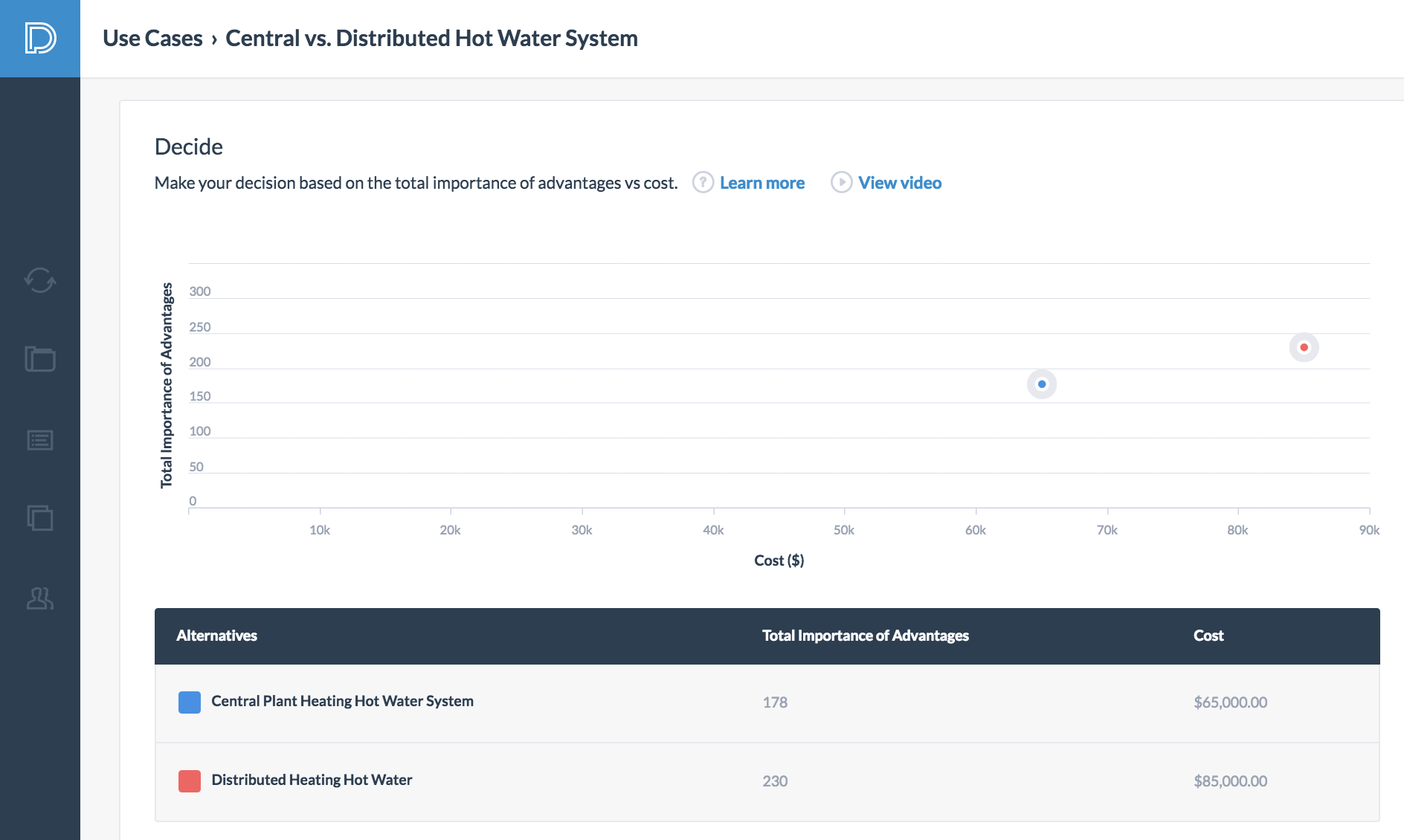 One of the benefits of using Paramount Decisions is the automatically generated reports. The software can create two types of reports base on the data inputted for the decision: 1) a full report and 2) a single page (A3 report). The contractor is able to send out the report to each of the stakeholders to communicate the rationale of this decision. On the next project, he will reference the factors and criteria that he used for this decision and re-use/modify them to fit his new decision. Paramount Decisions has increased the speed of his decision-making process and allowed him to solicit inputs from stakeholders in the process. 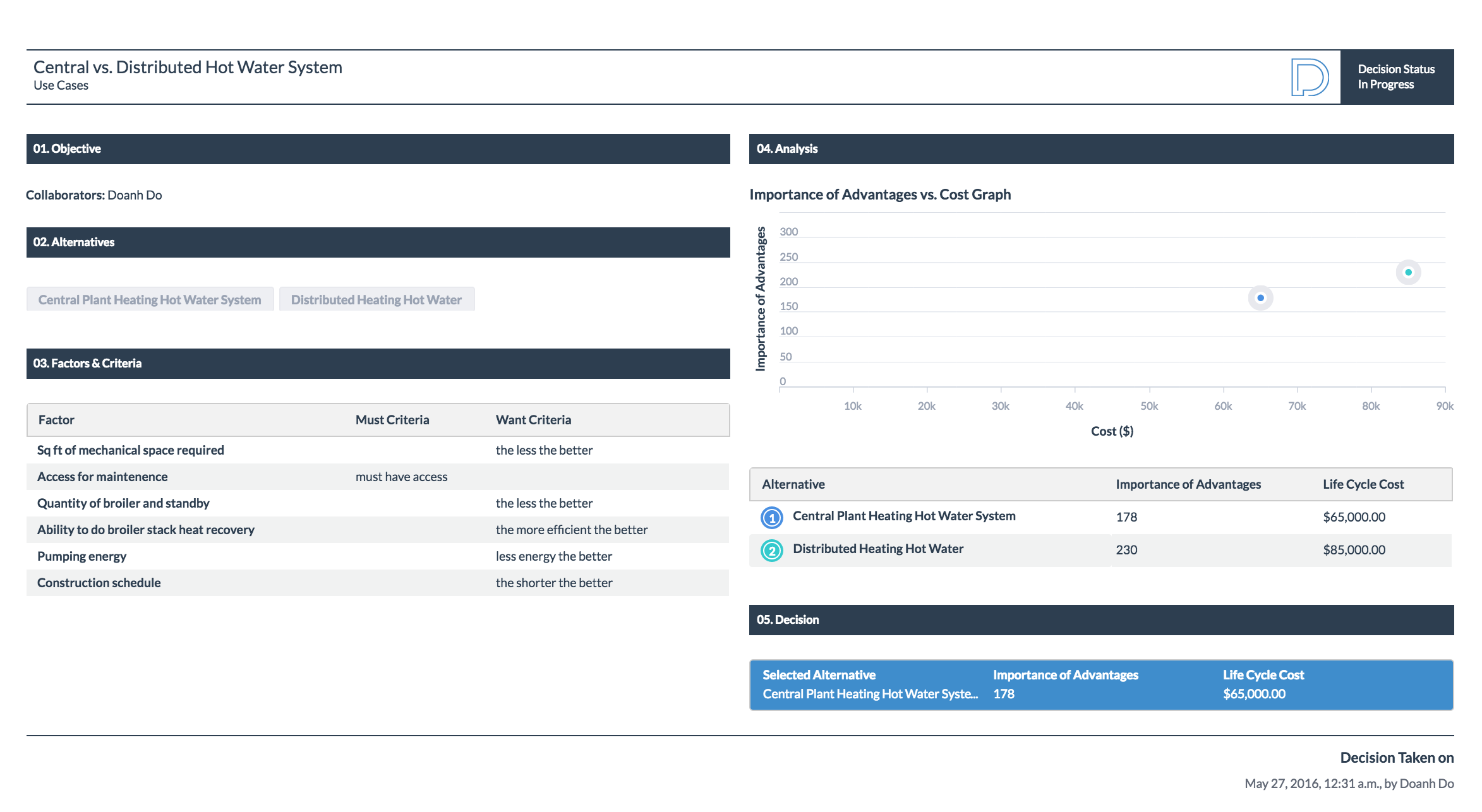 Deciding Whether to Build or Buy a Medical Building

Deciding Between a Central versus Distributed Hot Water System

Selecting a Contractor for an IPD Project